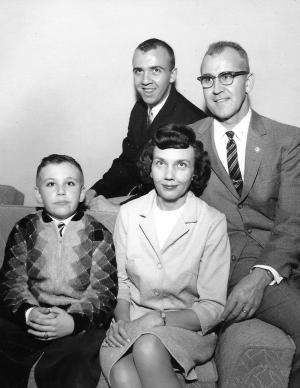 Betty Jean Kempf passed peacefully at her home to be with the Lord on February 9, 2019 at the age of 97.  Jean, as she was called by her family and friends, was born to Harvey and Mabel (Hosey) Nye February 6, 1922 as the middle child of five including Dorothy, Helen, Grace and Harvey.  She grew up a country girl having a love for horses, cattle, poultry, flowers and all the wonders and beauty of nature.

Jean met her future husband Henry Richard Kempf at a community dance in Eagle, MI with a courtship and marriage to follow.  They had both found the love of their lives and 77 years 7 months of devoted marriage followed.  That union produced two loving sons Larry and Karl.

Jean was an involved parent who was a home room mother, leader in P.T.A., Band Boosters and Scouts.  After her sons were raised, she went back to school and achieved her G.E.D. diploma then took college courses, some with her son Karl.  She also trained to be a tax preparer working for H & R Block and later on her own.

During WW II patriotism moved her to join the work force as a true Rosie the Riveter working at the Oldsmobile Forge plant producing artillery shells.  She rejoined the work force there again during the Korean Conflict as a precision grinder working on the turbine blades for jet aircraft engines.  Never shunning hard work Jean and Henry built their own house, from the basement up, in the years between these job events.

Jean had a very strong love for God and country contributing to several causes that promoted our American ideals and history.  Some of these included the Statue of Liberty – Eliss Island Foundation, Flight 93 memorial, WW II Memorial & Museum, Nye Family Association, the N.R.A., Olympic Shooting Team, St. Judes, Cancer & Heart Associations, Veterans groups, Humane Society and many others.  She also volunteered with her husband and sons at Capitol Area Community Services on the food distributions.

Jean was a loving daughter, wife and mother who always put an extra measure of kindness and caring into the lives of her family.  She will be cherished in the hearts and minds of her sons forever with love and thanks for a truly great mother.

Jean would have encouraged you to donate in her memory to a cause that will help make the world a better place for us all.  God bless you.

Private family services have been completed with burial in the Sunfield Cemetery.

Please visit a webpage designed especially for Jean to light a candle in her memory or leave a condolence for the family www.RosierFuneralHome.com

To send flowers to the family or plant a tree in memory of Betty Jean (Nye) Kempf, please visit our floral store.