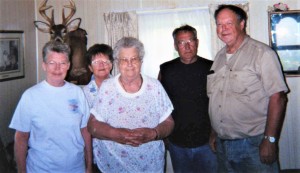 Hilda Ione Kenyon, 96, of Portland, MI passed away on December 12, 2018 at the Portland Assisted Living Facility in Portland, MI.  She was born October 3, 1922 in Mulliken, MI to Alonzo and Eva (Thomas) Osman.  Hilda was a graduate of Portland High School Class of 1940.  She married Henry Kenyon on August 12, 1940 at the Ionia Free Fair Grand Stands.  She retired from the State of Michigan, Department of Public Health, where she worked as a Lab Tech.

Hilda was preceded in death by her husband Henry Kenyon on April 30, 2004 as well as her parents, two brothers Otto and Max Osman and two sisters, Reva Osman Tucker and Doris Osman Martin, her son-in-law Reg Butts and grandson Brad Kenyon.

Hilda enjoyed playing Bingo and cards and spending as much time as possible with her family.  Years ago, Hilda and Henry spent weekends summering at their cottage on Morrison Lake and later they spent winters in Florida near their daughter Sharon.

Funeral services will be held on Tuesday, December 18th at 11:00 am at the Sunfield United Brethren Church, 8436 W. Grand Ledge Hwy, Sunfield, MI.  Visitations will be held at the church one hour prior to the funeral and on Monday, December 17th from 5 to 8pm.

In Lieu of flowers, contribution may be made to the Humane Society.

Please visit a special page created for Hilda to light a candle or leave a condolence for the family: www.RosierFuneralHome.com The family has entrusted the arrangements to the Independent Family Owned Funeral Home in Sunfield: Rosier Funeral Home.