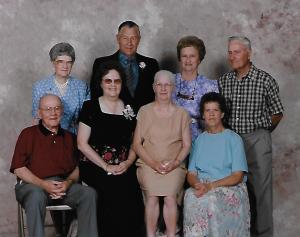 Bethel Marceil Stambaugh, age 89, went home to be with her Savior on May 1, 2020. Bethel was born on July 27, 1930 in Woodland Township, Michigan to Royal and Rosa (Smalley) Frantz. She graduated from Sunfield High School in 1948 and later attended Elkhart Business University, graduating in 1950 with a degree in dental nursing.

Bethel married Raymond Stambaugh on June 9, 1951. She was a devoted mother to their two sons. She attended Sebewa Baptist Church for many years, and her love for children was evident as she served in the church nursery, teaching Sunday School and working in the AWANA program. No visitors to the church were there long before meeting Bethel! She always remembered their names after the first meeting, especially the names, ages, and interests of each of their children. Many were blessed by her welcoming spirit over the years. She loved being a wife and mother. But one of her most treasured roles was that of Grandma, not only to her seven grandchildren but to many other children and adults alike. Her grandchildren were blessed to know that she prayed for each of them and their families daily. Later in life she took great pride in being a great-grandmother and awaited the arrival of each one of her thirteen great-grandchildren with much anticipation.

Bethel loved music. During the 1970's, she toured and sang with her husband, sons, and sister Gwen as the Gospel-Aires. She also sang alto in the church choir as well as in the Lakewood Area Choral Society. One of the highlights of her time in the choral society was when she was honored with a 25-year service pin.  Bethel was an avid gardener. She often talked of how much she had enjoyed her time as a child working with her father in the fields of her family's farm, and she tended a large garden at her own home each year for most of her life. She was a dog lover, and she and her husband owned several boxers over the years.

But Bethel's favorite hobby was doing plastic canvas crafts. She faithfully cared for her mother-in-law and her husband's aunt in their final years and completed hundreds of plastic canvas projects during the time spent in doctors' offices and hospital waiting rooms. Her great-grandchildren were gifted with counting books and a set of alphabet blocks she had made, and several of her Christmas ornaments are still displayed and enjoyed by her family every year.

Bethel was preceded in death by her husband of 67 years Raymond Stambaugh, her sister and brother-in-law Eleanor and Leonard Dayton, and sister Beverly Welton. She is survived by her sons Michael (Cynthia) Stambaugh and Gregory (Sallie) Stambaugh, seven grandchildren,13 great-grandchildren, as well as her brother Wendell (Norma) Frantz, sister Gwen Shelly, and many nieces and nephews.

Private graveside services have been held. A Celebration of Life service is being planned, and details will be announced at a later date. In lieu of flowers, the family suggests donations be made in Bethel's name to either Sebewa Baptist Church or to the reconstruction of the missionary house at the Centennial Secondary School in Sierra Leone, Africa. The house will be dedicated in memory of Bethel's husband's aunt, Bernadine Hoffman, a longtime missionary at the school. Checks to Sebewa Baptist Church can be made out directly to the church. Donations for the missionary house can be made out to Michael Stambaugh who is overseeing the distribution of the funds to U.B. Global and Reverend Joseph Abu as they oversee this project.

Please visit a special page created for Bethel to leave a condolence for the family:  www.RosierFuneralHome.com