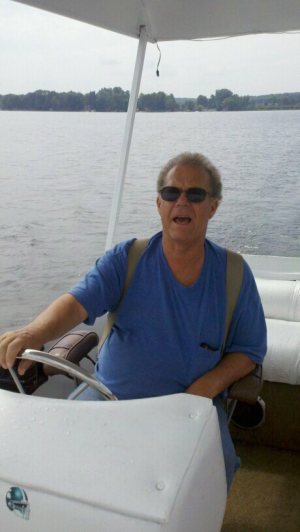 Bruce Gerald Duff, 75 passed away quietly at home on April 18, 2021.  Born in Lansing MI on April 14,1946 to Joseph and Norma (Vorce) Duff. Bruce lived a full and rewarding life.  A veteran of the Airforce where he received an honorable discharge July 26th, 1971 and a month later, he married Carol Wieland.  After his devotion to the Air Force, Bruce returned home to work for General Motors. He retired after many years as a materials handler at Oldsmobile in Lansing.  Retirement was his great reward in life. He traveled the country, spent time at his Chippewa Lake cottage, and winter home at Winter Haven Resort (Brownville, TX). He loved his Michigan State Spartans, Detroit Tiger’s, his toys (tractor, boats, ATV’s), blackjack, his guns, ham radio, and woodworking.  Bruce found time to get his private pilot’s license and owned a plane which he was proud to fly.  His grandchildren also brought him great joy.  Bruce was preceded in death by his parents Joseph and Norma (Vorce) Duff, son’s Jay and Marty Duff, wife Carol (Wieland), the love of his life, married 36 years, and brother Gordon (Dianne) Duff. He is survived by his good friend/wife Julie (Solgat/Denome), his brothers  Dennis (Eileen) Duff,  Roger Craft, sisters Sandy Sills,  Karin Pewoski, Sharon  Craft, his son Don Duff, son Scott Duff, daughter Cherie, step-son John (Kim) Solgat, step-son Jason (Lindsay) Solgat, step-daughter Gina (Josh) Huhn, step-daughter Jamie (Ed) Dankbar, his grandchildren Blake Price, Karleigh Solgat, Savannah Solgat, Madelyn Solgat, Jackson Solgat,  Bradley Huhn, William Huhn, Zachary Huhn, Nicholas Huhn, Christopher Huhn,  Angel Solgat and Gabriel Solgat, Hayden Ackerman. He also leaves behind many nieces and nephews which he adored through his life. He will be greatly missed, but the memories he provided will be passed on.

To send flowers to the family or plant a tree in memory of Bruce Gerald Duff, please visit our floral store.

A Memorial Tree was planted for Bruce

Private Service/Celebration of Bruce's Life May 7, 2021