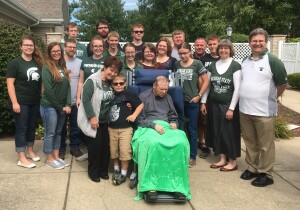 David James Drury of Sunfield, MI, passed away peacefully on June 30, 2020.  David was born on October 11, 1947, in Lansing, MI, to Perry and Mary Drury.  David moved, with his wife Rhea and oldest son, to Sunfield in 1969, where he lived until moving to Lansing in 2013.  David worked at Demmer Corporation in Lansing for more than 40 years.

David was a fan of many sports, including the Lakewood Vikings, especially when his children were involved, the MSU Spartans, and the Detroit Tigers, Red Wings, and Lions. David was an avid golfer, learning to golf from his brother-in-law Jack Pestle as a teenager and golfing throughout his life, especially with his brother-in-law Dave Finnie, until his health failed.  When his children were young, he enjoyed playing softball as well as bowling.  David greatly enjoyed his family, especially his grandchildren, and loved spending time in King’s Valley in Gaylord, MI, where his ashes will be placed.

In lieu of flowers, contributions may be made to Sunfield Area SPY’s (Sponsors of Programs for Youth) PO Box 31, Sunfield, MI  48890 or the Alzheimer’s Association.

Please visit a special webpage made especially for David, to light a candle in his memory or leave a condolence for the family. www.RosierFuneralHome.com

To send flowers to the family or plant a tree in memory of David James Drury, please visit our floral store.