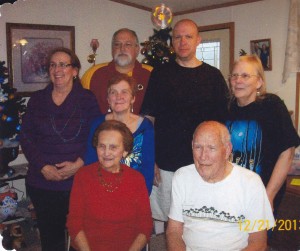 On Thursday, October 10th, 2019 our Loving Heavenly Father called George Kedric Monasmith of Sunfield, MI, home to be with Him. George was 89 years of age and a beloved husband, father, grandfather, great-grandfather, and friend who will be thought of and missed every day.

George was born at home in Woodbury, MI, on January 12th, 1930, as the only son of Kedric and Violet Monasmith. He graduated from Woodland High School in 1948 and went directly to work for Fisher Body (General Motors) in Lansing, MI, and remained there for 33 years. He also attended Michigan State University for one semester. On May 31st, 1952, George married his wife, Jane Hart Monasmith, at Wacousta United Methodist Church and they lived in Lake Odesa until moving in 1957 to Sunfield, MI, where they raised their family. George served in the Michigan National Guard during the years of the Korean War but was never deployed. After his retirement from Fisher Body he worked for Dave Rosier at Rosier Funeral Home for over 30 years. He attended church with his wife at Sunfield United Methodist Church.

Visitation and a Celebration of Life Service will be held at the Sunfield United Methodist Church. The Visitation is scheduled for Tuesday, October 15th, from 5 PM to 8 PM and the Celebration of Life Service with a luncheon to follow, will begin at 11:00 AM on Wednesday, October 16th. Interment with Graveside Service will be at the Woodbury Cemetery following the luncheon. All are welcome to attend. In lieu of flowers, please send contributions for George Kedric Monasmith Memorial to the Sunfield United Methodist Church: c/o Rosier Funeral Home, P.O. Box 36, Sunfield, MI, 48890. Also, feel free to express your thoughts and memories of George in the online Guest Book at www.RosierFuneralHome.com.

To send flowers to the family or plant a tree in memory of George Kedric Monasmith, please visit our floral store.