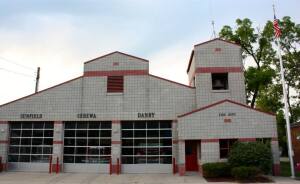 Hans was born August 23, 1933 in Sunfield, MI the son of Dr. Stanhope and Florence (Schavey) Huyck. He graduated from Sunfield High School in 1952 where he was an outstanding athlete. After graduating from high school, he married Wilma Millard on May 24, 1954. Hans and Wilma made their home in Sunfield where they raised their four children.  Wilma preceded him in death on October 3, 1997.

Hans, or Doc as he was commonly referred to, worked 60 years in the furniture industry beginning with Mapes Furniture, “The Big Store in the Little Town”. He ventured out on his own as an independent manufactured furniture representative.  His sales career lasted 60 plus years retiring at the age of 82.

As an athlete, Hans participated on many different baseball leagues.  He later moved onto fast pitch softball where his team, the Sunfield Lions, won several championships.  Hans gained numerous lifelong friendships over his ball playing career. He was an avid hunter, fisherman, and golfer. Doc also had a deep love for the University of Michigan and cheering for their teams in many Big 10 championships.  Later in life he became a Master in Woodcarving. He proudly gifted his carvings to his children, grandchildren and great grandchildren.  Hans was a licensed private pilot.  Hans and his copilot Wilma owned a Taylorcraft 2 seat plane that they enjoyed flying around the State of Michigan.

Wilma proceeded him in death in 1997.  He later found companionship and adventure with his partner, Shelly Bushman.  He and Shelly enjoyed, cruises, casinos, and their home in Florida where they resided together for a number of years.

Graveside services will be held on Saturday June 12th at 11:00 am at the Sunfield Cemetery in Sunfield, MI.  Luncheon will follow at the Sunfield Park under the pavilion.  Memorial contributions in memory of Hans may be directed to the Sunfield S.P.Y.’s, or the Sunfield Fire Department Auxiliary.

Please visit a special webpage made especially for Hans, to light a candle in his memory or leave a condolence for the family. www.RosierFuneralHome.com

To send flowers to the family or plant a tree in memory of Hans Frederick Huyck, please visit our floral store.