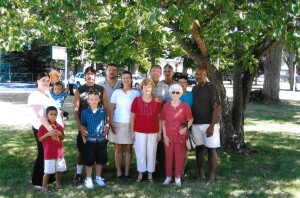 Jeannine B (Fleetham) Rogers, age 86, went to be with her heavenly father on March 6, 2022.  Jeannine was born on March 2, 1936 in Lake Odessa, the oldest daughter of Edgar and Rosa (Beland) Fleetham.

Jeannine graduated co-salutatorian from Sunfield High School in 1954.  The spring of her senior year she was selected by her classmates as “Miss Sunfield” to represent the school and community at a business and industrial exposition in Lansing and became the Queen of the Kaiser motor car exhibition.  When the love her life returned from Korea, Jeannine married Cecil Lloyd Rogers in 1957 and began her journey as a wife and mother.

Jeannine loved her church, where she found great joy in teaching Sunday school classes to the children.  She also enjoyed spending time with her “coffee group” and her many other friends.

Jeannine was preceded in death by her husband Cecil and son Blane.

In lieu of flowers, memorial contributions can be made to a charity of your choice.

Please visit a special webpage made especially for Jeannine, to light a candle in her memory or leave a condolence for the family. www.RosierFuneralHome.com

The family has entrusted the arrangements to the Independent Family-Owned Funeral Home in Sunfield: Rosier Funeral Home.

To send flowers to the family or plant a tree in memory of Jeannine B (Fleetham) Rogers, please visit our floral store.