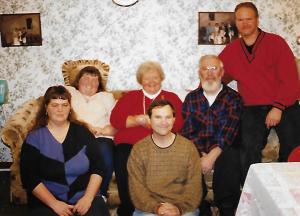 Phyllis Joan Baes, age 83, of Lake Odessa, went to be with the Lord on Saturday March 14, 2020.
She was born December 23, 1936, daughter of Bernard Bertie and Virginia Marie (Appleton) Lee in Perry, MI.  She married Robert Baes April 30, 1955 in Coloma, MI.  Their family moved to the Lake Odessa area in 1968, where she later received her diploma from Lakewood High School.
She is survived by her children, Daniel (Gayle Brooke) of Lake Odessa, Mark Baes of Cass City, Dawn (Phil) Brodbeck of Lake Odessa, and Lori (Jack) Hansen of Lake Odessa, grandchildren Nathan (Jason) De Long, Amber (Gordon) Redman, Preston Baes, Andrew Brodbeck, Natasha (Terry) Kotila, Kyle Peake, Erin (Travis) Brodbeck and several great grandchildren.  She is also survived by her brother, (Bernard) Roy Lee of Tennessee, and step-brothers and step-sisters Ronnie (Linda) Lillywhite of Harrison, Carol Modert of Mason, Darlene (Kurt) Voigt of Charlotte, Alane (Bill) Hart of Laingsburg.
She was preceded in death by her parents, her sister, Marilyn, husband, Robert, and infant son Robert, Jr.
Phyllis was a caregiver to both small children and the elderly throughout her life.  She and Bob spent many happy hours drinking coffee and visiting with friends at “Our Place” Restaurant in Woodbury.  Her hobbies included gardening and doll collecting.
Graveside service 11:00 a.m. – Friday March 20, 2020 at Sunset Memorial Gardens, Ionia, MI.

In Lieu of flowers, contributions may be made to: ZLCW (Zion Lutheran Church Women)

To send flowers to the family or plant a tree in memory of Phyllis Joan (Lee) Baes, please visit our floral store.