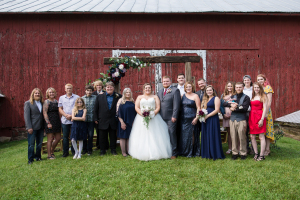 Rich was born to Fred and Betty (Bond) Veith on November 25, 1951 in St. Johns, MI.  In 1971 he graduated as a class clown from Laingsburg High School in the town where his family grew up.   His entertaining nature gained him lots of Wolfpack friends.

December of 1971, he was drafted to be all he could be and spent 6 years in the Army.  During his tour in Europe he was a clerk typist and a decorated M-16 marksman.  He was stationed in Germany while earning his National defense service medal.

During this time in the service, he married his high school sweetheart, Sheila Fry and had his favorite (only) daughter, Melanie.  After they divorced in 1978, he met the love of his life, Sandra “Sandy” Jean Apsey Claflin from the little village of Sunfield which is where they called home.  She fell for his Dad jokes, his loving heart, and the way he was with her son, Andrew (whose father had passed).  On February 2, 1980, Rich and Sandy were married and every year on groundhog’s day for the last 40 years they celebrated their anniversary too.  Two years later they had a son together, Lucas.

Over the years, Richard worked as a hammerman and inspector at drop forges and served as a cub scout master while Sandy was a den mother.  He attended Sebewa Church and Capitol City Church of God in Lansing.

He enjoyed the Sunfield Farmers Picnic, golfing, watching the Lions (even though they always lose), tigers and Michigan games. He loved his family time and our annual Lake Michigan trip.  Most of all, he loved fireworks, making people laugh and putting on the best Halloween house display in town.

He arrived at the pearly gates after his parents, Fred and Betty Veith, Father-in-law Fred Apsey, and brother-in-law Norm Wurm.

He was an amazing man, husband, father, uncle, brother, son, and friend.  We will all greatly miss his self-made jokes (good and bad), his incredible ability to recite movie lines, the way he loves us and that big smile.

His celebration of life will begin Tuesday, September 1, 2020 with visitation from 2-4pm and 6-8pm with the funeral on Wednesday September 2, 2020 at 11am at Sunfield United Brethren Church, 8436 W Grand Ledge Hwy, Sunfield, MI 48890.  Contributions can be made to the family to help with expenses.

Please visit a special webpage made especially for Rich, to light a candle in his memory or leave a condolence for the family. www.RosierFuneralHome.com

To send flowers to the family or plant a tree in memory of Richard Duane Veith, please visit our floral store.

Contributions can be made to the family to help with expenses