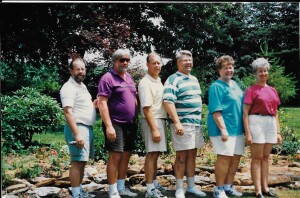 Bob Harms was a jolly man with an infectious laugh who wore many hats.  He farmed with his family and in partnership with his brother Ted on acreage in the middle of Sunfield Township (Sunny Center Farms) for the most of his life. Bob supported agriculture through his involvement in Farm Bureau with Eaton County, State of Michigan and National activities.  In 1970, he won the State Young Farmer’s Discussion meet and represented Michigan in the National competition, where he achieved second place.  Bob was an active member of Toastmasters International and loved to talk as friends will attest.  After retirement from actively farming, he was hired at Michigan Farm Bureau where he was the manager of their Group Purchasing department for several years. Later he enjoyed a new direction as a crop insurance adjuster where he could be outdoors and travel around the state meeting farm families.

Bob graduated from Michigan State University Short Course which was a two-year program especially for people who were serious about pursuing farming or agricultural related business. He was a big fan of Michigan State sports.

Bob’s favorite activity was early morning fishing at the cottage on Long Lake near Ionia which we shared with dear friends, Pete and Jan Wilford’s family for 35 years.  He loved to sing and was a founding member of the Lakewood Area Choral Society for 20 years and was given the Emeritus honor when he left the group.  He continued delighting audiences with karaoke performances in the Fort Myers Florida community where we spent winter months for many years.  The most requested song for him to sing was “Oh Lord It’s Hard to be Humble”.

Bob held many positions of leadership in The Sunfield United Methodist Church through the years and enjoyed being part for the Worship Leader team, a quartet that led the music. Bob was a 4-H leader and supported our children with livestock projects as well as guiding them into other skills.

Bob married Nancy (Leech) Harms on March 11, 1967 and they celebrated their 55th anniversary at Green Acres where Bob lived for 10 months due to his declining Alzheimer’s disease.  He passed away on March 21, at Sparrow Hospital Ionia with his wife Nancy two children, Laura Harms, granddaughter Emlin Harms, Charles Harms and wife Amy, and family friend Vicki Pontz were all present.

Bob is survived by his wife Nancy and brothers Ted Harms, Carl Harms and Linda, Ned Harms and Shirley, Judy Harris and many nieces and nephews.

A Celebration of Life will be held on Saturday, May 7, 2022 at 11:00 AM (Bob’s Birthday) at the Sunfield United Methodist Church.  Luncheon to follow at the Harms home at 11371 Round Lake Rd, Sunfield.  Contributions may be made to the Alzheimer’s Association.

Please visit a special webpage made especially for Robert, to light a candle in his memory or leave a condolence for the family. www.RosierFuneralHome.com

The family has entrusted the arrangements to the Independent Family-Owned Funeral Home in Sunfield: Rosier Funeral Home.

To send flowers to the family or plant a tree in memory of Robert Lee Harms, please visit our floral store.