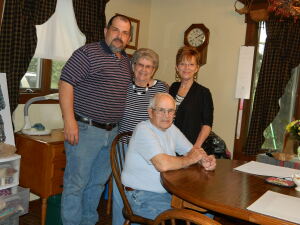 Robert Floyd Piercefield, 93 passed away quietly at the Portland Memory care facility on March 10, 2021 Born in Belding MI on December 10,1927 to Bart and Hazel (Dickerson) Piercefield Bob lived a full and rewarding life. A veteran of the U.S. Navy Bob was a witness to the end of WWII and present at the Bikini Atoll nuclear bomb tests of 1946. He returned home to work with his brother Herb Irwin and later drive semi-truck. He retired after many years as a millwright at Oldsmobile in Lansing. Retirement was his great reward in life. He and Audrey moved to Stanwood MI where Bob enjoyed gardening, hunting, tending to his draft horses and especially visits from his grandchildren often giving them wagon rides. Bob was preceded in death by his son William Lee Piercefield, granddaughter Megan O'Brien, his parents, sister Marie, and brothers Herb Irwin, William, Bart and Edward. Also preceding him were mother-in-law Margaret Eberly, sister-in-law Linda Martin and husband William, sister-in-law Beatrice Eberly, and brother-in-law Buster Eberly. He is survived by his wife of 69 years Audrey, his loving daughter Valorie (Frank) Goodman and his son Robert, grandsons Patrick (Allison) O'Brien, Brandon (Katie) Piercefield, Joey Piercefield, his precious great grandchildren Megan and Camden, sisters Doris, Marion, Joann, Joyce, Cookie, Annie, Katie, Pat, brother-in-law Burl Eberly and sisters in law Joyce Martin, Grace Jipson (Marty) and Delores Eberly. His story telling and memory of his younger days will be greatly missed but hopefully passed on.

To send flowers to the family or plant a tree in memory of Robert Floyd Piercefield, please visit our floral store.

A Memorial Tree was planted for Robert